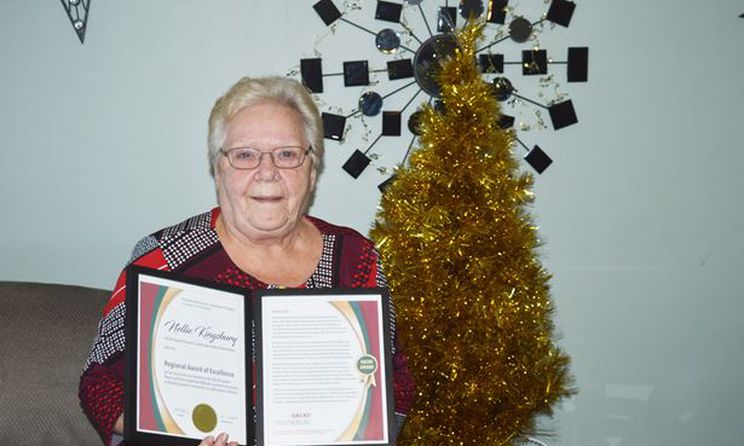 A local who has dedicated her career and volunteer time to supporting seniors is being recognized for that work.

Nellie Kingsbury was recently honoured with the Regional Award for Excellence in Eastern Ontario by the Older Adults Centres’ Association of Ontario (OACAO) for her work at the Golden Age Activity Centre in Renfrew.

“It really caught me by surprise,” the Horton resident said. “I was part of the OACAO board that chose the winners. When we announced the other winners for this year, one of the other members said, ‘Wait, we have one more award to give out.’ They then proceeded to present that award to me.”

Kingsbury says the award was something she never thought she would receive.

“I’ve never looked at myself as a prestigious person,” she said. “What I did, I did to help others and to keep them happy and at peace.”

Kingsbury is considered a driving force for the Golden Age Activity Centre since it opened in 2013, work she continues to this day. Before that, she enjoyed an almost four-decade-long career at the Bonnechere Manor.

Kingsbury says shortly after retiring from the Manor in 2009, she was well aware of the lack of supports and activities needed to keep seniors connected to their community.

“I’ve always had a dream to create a centre for seniors who were isolated and alone and to make sure they had enough programming,” she said. “After I retired, I was inspired to do something to help that cause. However, when you have a dream like that, you know you can’t do it by yourself.”

Kingsbury teamed up with fellow volunteer Karen Abbott and applied for grants under the banner of Renfrew and Are Seniors Home Support, which allowed them to open the centre. Since that time, Golden Age has become a notable institution in Renfrew, helping reduce isolation for hundreds of seniors in the area.

“The centre provides them with a place to socialize, to embrace educational opportunities and entertainment, to name a few things,” she said. “Not to mention there’s always a friendly atmosphere. I hope the centre continues on, even after I leave.”

The Golden Age Activity Centre recently closed temporarily due to the surge of COVID-19 cases in the area, but Kingsbury is hopeful it will open up again soon.

“We’ve gotten amazing support from the folks who do use it,” she said. “They’re sad that it’s closed down, but they also understand that we need to do everything we can to keep everyone safe. I just hope better days are coming.”

Kingsbury, an active member of OACAO, is always the first to volunteer her support and expertise to others.

“If anyone needs my help, I’m there to offer it,” she said. “That’s just the type of person I am.”

Kingsbury says since helping look after seniors is her life, she puts her all into it.

“To me it’s been a labour of love,” she said. “Throughout my time running the Golden Age and otherwise, I’ve met some new, great friends. This type of work not only helps keep my mind active, but it also gives me a purpose to get out of bed and do these things.”

Jonathan Mulvihill is a reporter with the Renfrew Mercury and InsideOttawaValley.com.